350 Maine is a supporter of this virtual rally for Indigenous Peoples’ Day working with the Tribal Sovereignty Coalition to co-host the event.

Maine enacts LD 99, An Act to Require the State to Divest Itself of Assets Invested in the Fossil Fuel Industry. The first in the nation to adopt such a mandate through legislation. This was spearheaded by youth organizing with Maine Youth for Climate Justice and 350 Maine.

350 Maine’s Program Manager and Maine Youth for Climate Justice’s Energy Campaigns Lead, are featured on the podcast, Grit on WMPG, exploring how Mainers respond to challenges like climate change. You can listen here.

Earth Week event - 350 Maine with MCAN, Sierra Club Maine and Our Power host day of action to encourage support for a consumer owned utility for Maine.

Co-hosted a webinar with Sierra Club Maine on a “Maine Green Bank”.

As a member of the Tribal Sovereignty Coalition we participated in a Virtual Rally in support of LD 1626 as the Legislature came back into session.

No Toxic Tanks Coalition holds an in-person Rally Against Toxic Fumes Near Schools, in South Portland.

Held a 'Direct Action and Climate Justice' webinar with guest Ethan Hughes presentation and discussion on centrality of direct action and racial justice in the climate movement.

Joined the No Toxic Tanks coalition to highlight the issue of fumes emissions from oil storage tanks across the state with a focus on South Portland.

Choose our 2021 focus: creating a ‘green bank’ for Maine, joining the Sierra Club Maine Chapter in this effort.

As a founding member of the coalition Maine Climate Action Now! (MCAN) we launched #VoteClimateJustice campaign.

With MCAN we held a webinar on creating a Maine Green Amendment.

Partnered with Protect South Portland to run the 'Smell My City' campaign gathering data to fight the fumes emissions from the oil storage tanks in South Portland.

As adult allies to MYCJ, we co-organized support from residents of Portland and South Portland to give testimony at City Council meetings to fund their Climate Emergency Resolutions work.

For more on our 3 days of Earth Day online action, click here!

Held with MYCJ and the Natural Resources Council of Maine, this webinar focused on what climate action is needed in the Transportation Sector of Maine. It was followed by a youth focused discussion and Question and Answer time.

Worked in concert with organizations across the state to support the work of the Maine Climate Council to draft a Maine Climate Action Plan.

As a member of the coalition Maine Climate Action NOW! we hosted 100 youth to come together in Augusta for the Maine Climate Council meeting to share their activism with each other, hold a press conference and meet the Council members over lunch.

Member volunteers act as adult allies and partner in on-going work with youth in Portland and South Portland to meet with the cities' Sustainability Officers to closely follow their joint climate change initiative as follow through on the Climate Emergency Declarations.

The Global Climate Strikes lead to immediate steps by municipal governments following when youth’s presentations of demands and a draft climate emergency resolution calling for bold and immediate action within a 2030 timeframe. These resolutions were adopted by Brunswick, Bar Harbor, Portland, and South Portland City Councils.

As part of an International Day of Global Climate Strikes adults joined youth in stopping business as usual and we saw record numbers rallying in Portland (2,000) Bangor, Bar Harbor and Farmington where hundreds amassed, and Machias where 50 gathered (2% of the population!) 350 Maine worked alongside intergenerational allies to organize these strikes while in other towns many independently gathered.

About 400 Maine youth from 20 schools—elementary, middle, high school, and college—left school to demand that climate justice be a priority for all state lawmakers. The Youth Day of Action was organized by Maine Youth for Climate Justice, and supported by adult allies and organizations involved in the Maine Climate Action NOW! coalition, including 350 Maine.

Hundreds to thousands of Maine youth walked out of their schools or workplaces across Maine on Friday March 15th. This was organized as part of an international day of strikes for climate action. These young people ranged from elementary school to college students. 350 Maine's youth engagement team, along with many other intergenerational organizations, utilized their organizing resources to support these student organizers. Read more here.

350 Greater Portland hosted, in partnership with the South Portland Energy & Recycling Committee and SMCC, a Window Dressers Community Workshop for South Portland residents January 5-10. 317 inserts were made at this workshop.

350 Downeast, in partnership with Machias Savings Bank and funded in part by the New England Grassroots Environmental Fund, hosted a Window Dressers workshop in Machias this past December. In just a few days, volunteers built 183 insulating window inserts.

For more on the South Portland and Machias window dressing events, click here!

In support of #youthvgov plaintiffs in Juliana v. United States.

350 Maine, Sierra Club Maine, Maine Conservation Voters, and the Maine Poor People's Campaign, led a march to a City Hall rally as part of a worldwide mobilization which took place days before the Global Climate Summit in San Francisco.

May Maine Climate Protectors petition to the Department of Environmental Protection

Maine Youth and Voters get their hearing with the DEP.

Rally in Congress Square Park, Portland, “Water is Life” featured Penobscot representatives speaking about their fight for their river and the fight to protect water in North Dakota. 350 Maine co-sponsored this fundraising event to send Penobscot Nation members to Standing Rock.

Standing Rock fundraiser speaker event co sponsored with University of Southern Maine students with presentations by a member of the Aamjiwnaang (Chippewas of Sarnia First Nation) and a member of the Penobscot Nation sharing their experiences at  Standing Rock.

350 New England joined 350 NY and NJ to stage a rally, march, and sit-in on railroad tracks to stop crude oil “bomb” trains rolling through Albany, NY endangering nearby communities and adding to the climate crisis.

2015 to Present - Penobscot Nation: Justice for the River

In an on-going relationship with the Penobscot Nation, 350 Maine stands in solidarity in the fight to protect the nation’s river and subsistence fishing rights in the legal battle with the State of Maine.

November and December - Road through Paris:

350 Maine organized biking and buses to bring Mainers to the march.

A broad coalition raised funds so the Americans could join the Healing Walk to be in solidarity with Indigenous peoples of Alberta. They witnessed the tar sands pits’ devastating impacts undermining their right to clean air, clean water.

The reversal of Portland Pipe Line Corporation’s pipeline to bring tar sands to South Portland was a threat to the city, but tar sands was a reality in Alberta. Working with a broad coalition of environmental organizations the Tar Sands Team chose to highlight this big picture to the region. They arranged presentations by First Nation Representatives (Athabasca Chipewyan and Beaver Lake Cree) of Canada and internationally awarded photographer.

Together with Protect South Portland and other environmental groups, 350 Maine backed a referendum against tar sands coming through Portland Pipe Line. Door-to-door and telephone canvassing; Hands-Across the Bridge and other large demonstrations took place.

Staged along with a flotilla of rafts and kayaks on Sebago Lake, street theater (on Route 302 in Raymond) of an ‘oil spill clean-up’ dramatized the threat posed by piped tar sands to Maine’s water supply.

Working in coalition with others, 350 Maine organized Portland’s largest Climate Rally ever; sounding the alarm against tar sands coming from Montreal to South Portland through the Portland Pipe Line. 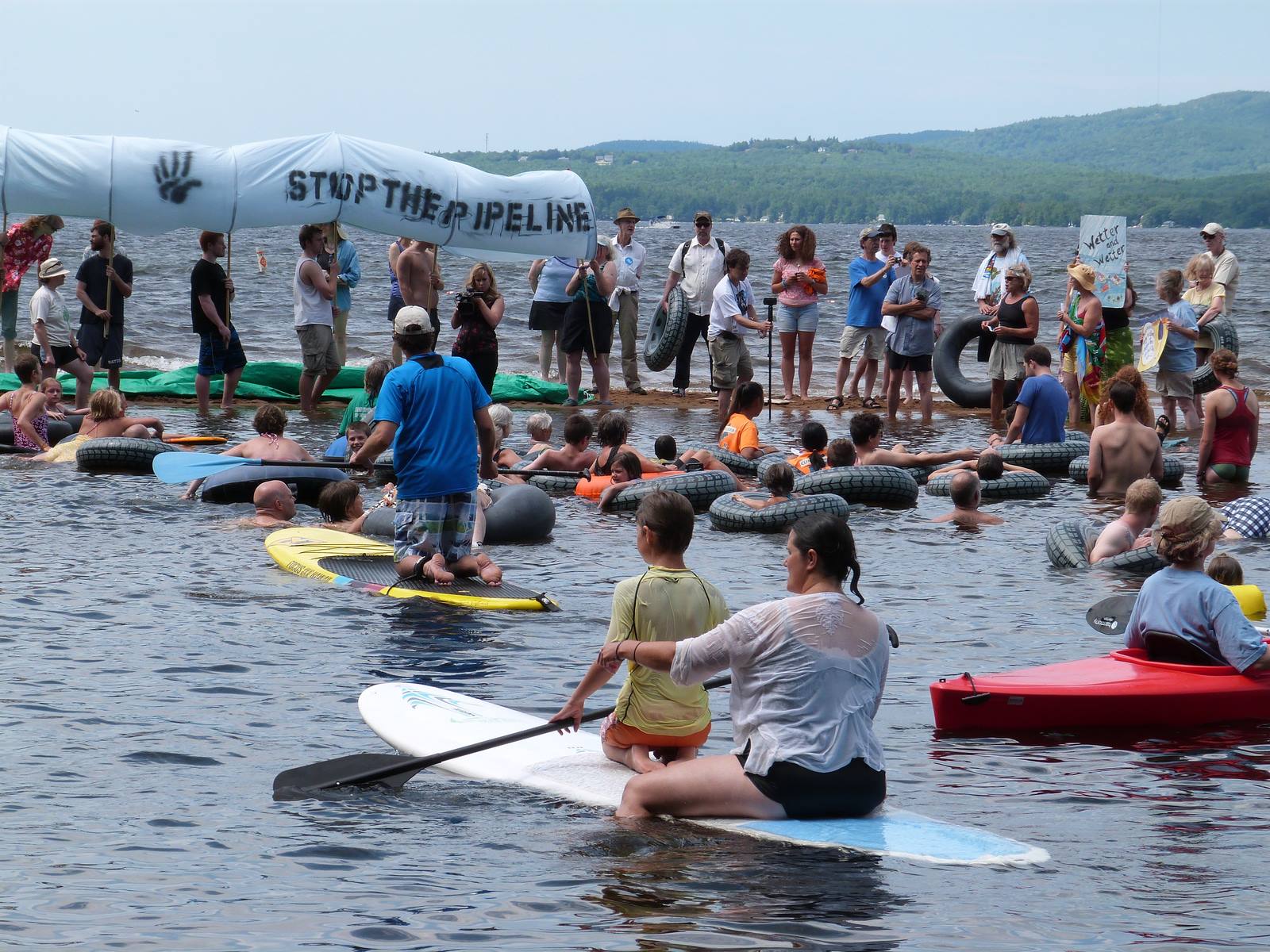 Standing room only at 350 Maine event at the State Theater in Portland.